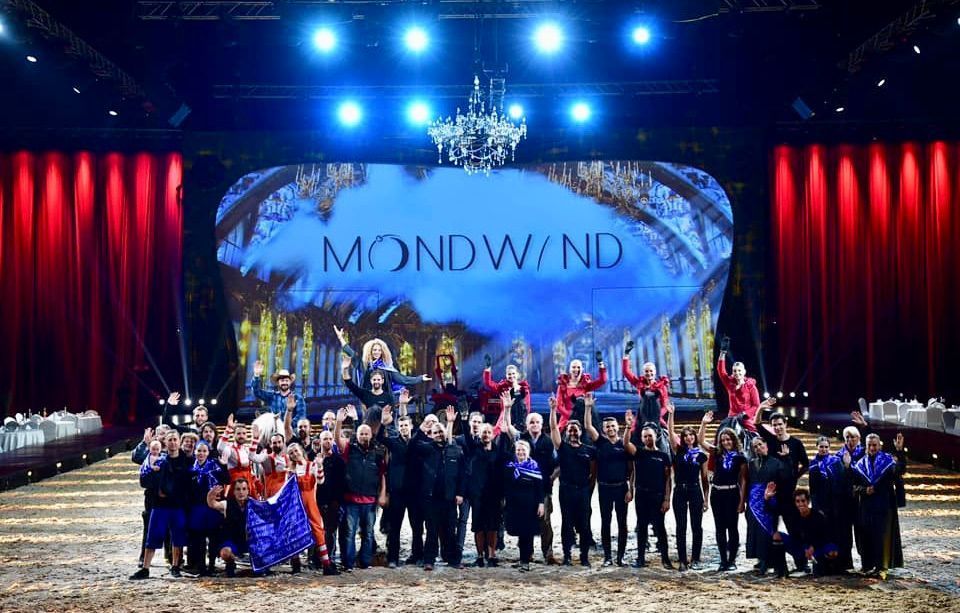 It is said that horses are the mirror of the soul, dance poetry, and music the language of passion. To unite these three and move the hearts of our audience is our passion!

As many horse breeds there are, as different they may present themselves in our show: Whether powerful Andalusians, proud Arabian stallions, elegant Friesians, cold-blooded horses, ponies, or agile Quarter Horses – our more than 40 horses and one donkey show masterful performances in liberty dressage, trick riding, classical dressage or comedy. They are accompanied by magical music, spectacular stage sets, and our top-class ballet ensemble.

Almost eighty performers provide behind the scenes for the perfect illusion of dream and reality.

As a teenager, the Ukrainian Katherina Markowskaja proved her dancing skills in the first row of the Ukrainian National Ballet. After training at the National Ballet Academy of Arts in Kyiv, she completed her studies at the Ballet Academy in Munich as a young Heinz Bosl Foundation scholarship holder. Freshly graduated, she received an engagement at the Saxon State Opera in Dresden, where she was appointed the first soloist two years later. She was awarded the Mary Wigman Prize in 1999 as the ensemble’s outstanding artist. In 2010, Markovskaya was engaged at the Bavarian State Ballet, where she shone as a soloist for the following six years.

When she was given the opportunity to dance alongside horses in the Holger Ehlers show “Apassionata – The Dream” in 2017, it was a dream come true. She is now continuing this dream in “Mondwind – The Magic Cloack”, in which Katherina Markowskaja slips into the mysterious “Orchidee” role and can once again demonstrate her skills alongside horses.

Russian-born Maxim Chashchegorov completed his dance training at the St. Petersburg Ballet Academy and, after graduation, was accepted directly into the world-famous company of the Russian Mariinsky Ballet. In 2007 he joined the Bavarian State Ballet, where he was a soloist for six years, making his debut in such famous productions as “Swan Lake,” “The Nutcracker,” and “Sleeping Beauty.”

In MONDWIND’s “The Magic Cloak,” Maxim Chashchegorov has to go through the adventure of his life in the role of the young good-for-nothing flâneur and save the world from the looming darkness.

The equestrian theater Artequus Equestre has a tradition of almost thirty years. Founded in 1989 by Miguel Barrionuevo, it follows the path of traditional baroque riding, whose origins go back to the European courts of the Renaissance period. The harmony between rider and horse, the informality, and lightness are the main features of this discipline.

Already years ago, Miguel Barrionuevo and the MONDWIND creative director Holger Ehlers celebrated together on stage at the premiere of the show series Apassionata. His son Alejandro Barrionuevo, who learned from his famous father from an early age, also delighted the audience in the show series with his skills. After the death of Miguel Barrionuevo, it is now his son Alejandro who continues the family tradition. He presents and passes on his Father’s and Master’s teachings worldwide. This to our great joy also to the spectators of the show “Mondwind – The Magic Cloak”.

Frenchman Kevin Ferreira is an outstanding equestrian artist at barely thirty years old who has been in love with horses since his early childhood. His career began as a teenager when his trick-riding talent and self-taught skills landed him a spot on the Cavaliers de l’Aventure team and Troupe Jehol, which took him as far as Morocco with performances. In the Dutch amusement park Efteling, he got to know and love the world of jousting. Performances at the world-famous Kaltenberg Jousting Tournament in the cavalcade of old master Mario Luraschi followed.

With his own trick rider team, Kevin Ferreira provides action and pure thrills with wild stunts and nimble horses in MONDWIND “The Magic Cloak.”

Since the age of four, Austrian-born Sarah Fritzenwanker had a clear goal in mind: to live and work with horses on her own riding facility. With a lot of hard work and an irrepressible will to pursue her dream, it became a reality.

For several years, she has been touring all over Europe with the Austrian Friesian Show Group “Moments in Black,” the world record holder in Friesian quadrille riding with 64 Friesians from 2003-2018 and also thrilled audiences in previous Holger Ehlers productions.

In addition, Sarah Fritzenwanker trains horses in dressage and circensics up to Grand Prix level, gives lessons, and, together with her paint-black show horses, is a sought-after performer both at competitions and shows, as well as at shootings or in commercials.

As a former artist of the Ukrainian National Circus, Viktor Kirka has been riding for productions of MONDWIND’s creative director and CEO Holger Ehlers for over ten years. Whether Norway, Lithuania, or Saudi Arabia: His talent and experience brought him together with his horses to the most exciting places in the world.

In the arena, the Ukrainian-born rider thrills audiences with his comedic and, at the same time, daring performances. Especially with his Rheinish-German Cold-blooded horse “Hermann.” The father of two always comes up with new jokes to make the audience laugh.

In MONDWIND, Viktor Kirka slips into the role of the old tailor, the previous guardian of the legendary magic cloak.

At school, she was an outsider; her only friends were horses. With an iron will, Ukrainian-born Tanya Baliuk pursued her goal of one day being able to present her horsemanship in front of a large audience. Years of hard work paid off: As a trick rider in international teams, she has already traveled to the Near and the Far East, and with MONDWIND – “The Magic Cloak” now to Europe!

Barely thirty years old, she studied architecture. Tanya Baliuk looks back on an eventful career. Most recently, in managing a historic show park near Kyiv, she also worked as a riding instructor for mentally and physically impaired children and was considered an expert in her home country for training so-called “problem horses”.

Whether free dressage or trick riding, classical dressage or circus skills: Tanya Baliuk is a true all-around talent. In MONDWIND – “The Magic Cloak,” she appears as a solo trick rider with a pitch-black Arabian stallion for the first time. Thrills guaranteed!

Born into a horse-loving family, Frenchwoman Iseulys Deslé began riding at a young age. At the age of 11, she learned trick riding with her first pony and the art of liberty dressage. Her desire for the world of horse shows was awakened, and she was soon performing at regional shows around her hometown of Lille in the north of France.

At 18, she joined the famous “Cavalia Odysséo” troupe, with whom she toured the USA, Canada, and Mexico. She then embarked on an almost year-long adventure to the Portuguese Dressage Champion Luis Valença Equestrian Academy.

Hardly any horsemanship is as demanding as the Hungarian Post, in which the rider steers two horses standing on their backs. A true master of this discipline is Paco Martos, who knows how to lead a team of several horses through all gaits Hungarian Post and does without a bridle. Paco Martos’ horses present themselves as free as wild horses. The young Spaniard flies standing on the horse’s back through the arena and offers the spectators an action-packed mixture of high riding school lessons, liberty dressage, and trick riding.

You can find out more about which cookies we are using or switch them off in settings.

This website uses cookies so that we can provide you with the best user experience possible. Cookie information is stored in your browser and performs functions such as recognising you when you return to our website and helping our team to understand which sections of the website you find most interesting and useful.

Strictly Necessary Cookie should be enabled at all times so that we can save your preferences for cookie settings.

If you disable this cookie, we will not be able to save your preferences. This means that every time you visit this website you will need to enable or disable cookies again.